At the age of 16, the drums became the instrument loved by Josivaldo Santos who, upon entering the church, began to realize through positive criticism from musicians and producers that it was necessary to understand the need to share his gift of praising God unrestrictedly. Hence came the motivation for conducting a deep musical study and the consequent and constant search for overcoming, always maintaining humility and knowing that no matter how much knowledge is acquired, there is always a lot to be learned. And the result of such dedication added to the immeasurable love for music, coupled with unshakable FAITH, could not be different: his talent began to be widely disseminated until today the name Josivaldo Santos became the reference when the subject in question is the beat of music gospel.
It is impossible to define Josivaldo Santos …
There would be countless adjectives that, in the end, would reveal only an artist who uses talent to make his heart beat
faster and stronger and in tune with God.

Valen is a great drummer who is one of the most popular female drummers in Colombia. Colombian drummer, with 22 years has become a reference in his country, playing with great artists, at large festivals, recording albums and traveling around the world playing drums. Now it has five important brands that sponsor it. She is the official distributor of Agean Cymbals in Colombia, she feels happy because she represents a brand of professional cymbals, the support has been amazing.

From The United States, Luke Wright is a 14 year old drummer/musician. Luke has had the opportunity to play in many locations across the country. Luke has also recorded music with his band and various other artists of different genres since the age of 11. Luke began playing at age 7 and has developed into one of the most promising young talents playing drums today. Luke has had the privilege of playing onstage with his drum hero, Mike Portnoy, Billy Sheehan and Richie Kotzen. Luke is proud to be in the Agean Cymbals family and looks forward to a very bright future with Agean.

He was born in Casimiro de Abreu- Rio de Janeiro – Brazil, started playing drums at the age of 5 in his local church, where he took his first musical steps, at 15 he started playing professionally, until the present moment where she is 23 years old and plays for one of the main gospel singers in Brazil called Gabriela Rocha. André has many followers on his social networks, on YouTube there are almost 1 million views and on Instagram he also has expressive numbers!

Hungarian jazz drummer, composer, music educator and producer Balázs Bágyi would definitely be on the list of contemporary artists who represent a 21st century global approach to today’s jazz and world music scene.

His unique style of playing drums is full of energy and passion, using both powerful attacks and gentle movements on his instrument simultaneously. Rolling rhythms and natural warm sounds are the main characteristics of his musical voice, his melodic way of playing the drum kit gives a complex music experience.

During the last decade he has became an internationally respected artist, collaborating with numerous American and European musicians and touring several times in the USA, all across Europe and China.

Balázs is the President of the Hungarian Jazz Federation.

I’m Stu. I’m a drummer from the UK with a passion for teaching and sharing. I work from home teaching and creating content for my Instagram page @beyondthebeat17 and YouTube. I’ve been playing for close to 20 years now and although over that time my tastes have changed, my style has undoubtedly developed from a background of rock and metal, although my self taught attitude (and one of things I’m passionate about communicating with my students) has led me to believe that there should be no rules, as this instrument for me is a symbol of self expression and positivity.

He was born  in Izmir on July 04, 1990. He met music at a very early age. He made his first professional studio recording at the age of 12 with his father Hamdi and uncle Mehmet Akatay, who are known as Akatay brothers (akatay project) on their albums. Along with his father and uncle, who came from an important musician family, he continued his music life and received special trainings with the feyzes he received from great masters.

His mission in music is to modernize and adapt the past’s mystics to today’s sounds. He has signed many cover projects and is also a founding member of the cabinet big drama group, together with (local strangers) and (just feel) albums. He has worked with important music people and orchestras in very important music festivals in the world and in our country, some of which are; Trilok Gurtu, Marcello Route, the royal philharmonic orchestra, boy george, Sezen Aksu, Tarkan, soulful, coral grandfather. Akatay attending many world festivals such as Montreux jazz, koblenz horizonte, sydney turkish week, spain burgoss, africa cap town buskers fest. He represented our country with his music in various parts of the world including America, Europe, Asia and Africa. The artist is still actively working on stage and studio works of many famous domestic and foreign names.

Ahmet is a great progressive drummer. He plays at various music styles. Besides drumming with his own music group FARFARA, he also posts regular educational videos in his social media profiles. He is quite well known amongst young Turkish Drummers and he has contributed a lot to drumming community in Turkey.

CANBERK CEBECIOGLU
She was born on January 26, 1994 in Istanbul. He started growing with music and sports from a young age. He increased his curiosity with the support of his family. He started to discover himself from the age of 10 and then took lessons from DrumClub and Mustafa Telli. During this time, he performed with many groups and artists. Later, he took part in the stage studies with the “Mogollar” group. He is currently actively working with Ufuk Beydemir in both stage and album recordings. He also works in Tolga Görsev Music Production as an assistant and recorder. Some names with which he worked,
Ufuk Beydemir
Oguzhan Ugur
Dilhan Senen
Emircan İğrek
KENNETH PATRICK JOHN
Growing up in a Surinamese/Dutch environment in Amsterdam surrounded by Professional musicians, Kenneth started playing guitar at age of six and continued on Drums/Percussion at fifteen years old.
Influenced by Sixties Southern Soul, Caribbean music styles and Jazz he started as autodidact mastering Rhythms and learning himself how to read charts creating a style heavily influenced on feel and groove that provides a carpet for other musicians to excel on!
Playing with artists like Marco Borsato, Hans Dulfer, Thijs van Leer and Indorock legends Woody Brunings and Eddy Chatelin he can be considered an allround sessiondrummer!
For years leading his own formed group The Soul Keys with whom he had some succes being regularly invited playing the North Sea Jazz Club.
They even caught the ears of Dap Tone Records and Soul diva Candi Staton!
During this time he was also leading a 50 piece choir with succes.
Kenneth can also be heard on records from the Last Wave and Bruno Rocco with whom he recorded own material on several studio dates.
These days he can be heard playing frequently with coverband Tabs who are well known for their energetic style in which Kenneth plays a big role with his hard driven grooves in which you can hear his Jazz/Caribbean roots.
DIEGO NEGRO SEGURA
At age 14 he took the Drums as a passion, putting together different bands and playing in different places and stages. He also held several Drummers Meetings and events with Jorge Araujo, Sebastián peycere, Sergio masciotra, Gustavo Rowek, Cristian judurcha, Martín reyna and more artists such as Jaf, González wire, Botafogo, Luis Robinson, among others. He is currently a singer and drummer of the power rock trio MUÑECA ELECTRICA with records recorded in the best studios.
It is Argentine from the city of centenary, province of Neuquén and Argentine Patagonia …. Well south of the world! Thanks agean for being part of the family !!!
PABLO GARROCHO
Pablo Garrocho, an Argentine musician, lives in Buenos Aires, began his studies at the age of 8 with Oscar D’Auria, at 16 he began teaching drums and then taught for more than 20 years at the academy of music “El angar music center “.

At 18 he began working professionally with guitarist Daniel Tellis. I play in countless bands of various styles and some musicals.

In 2006 he toured with singer Eric Martin. (Mr. Big, U.S.A) playing in countries like Brazil, Chile, Paraguay and Argentina, continuing with several tours of South America and India for more than 3 years, along with Richie Kotzen (Poison – Mr. Big) and Jeff Scot Soto.
I also accompany the American guitarist Bruce Kullick (Kiss) performing some shows in Argentina. 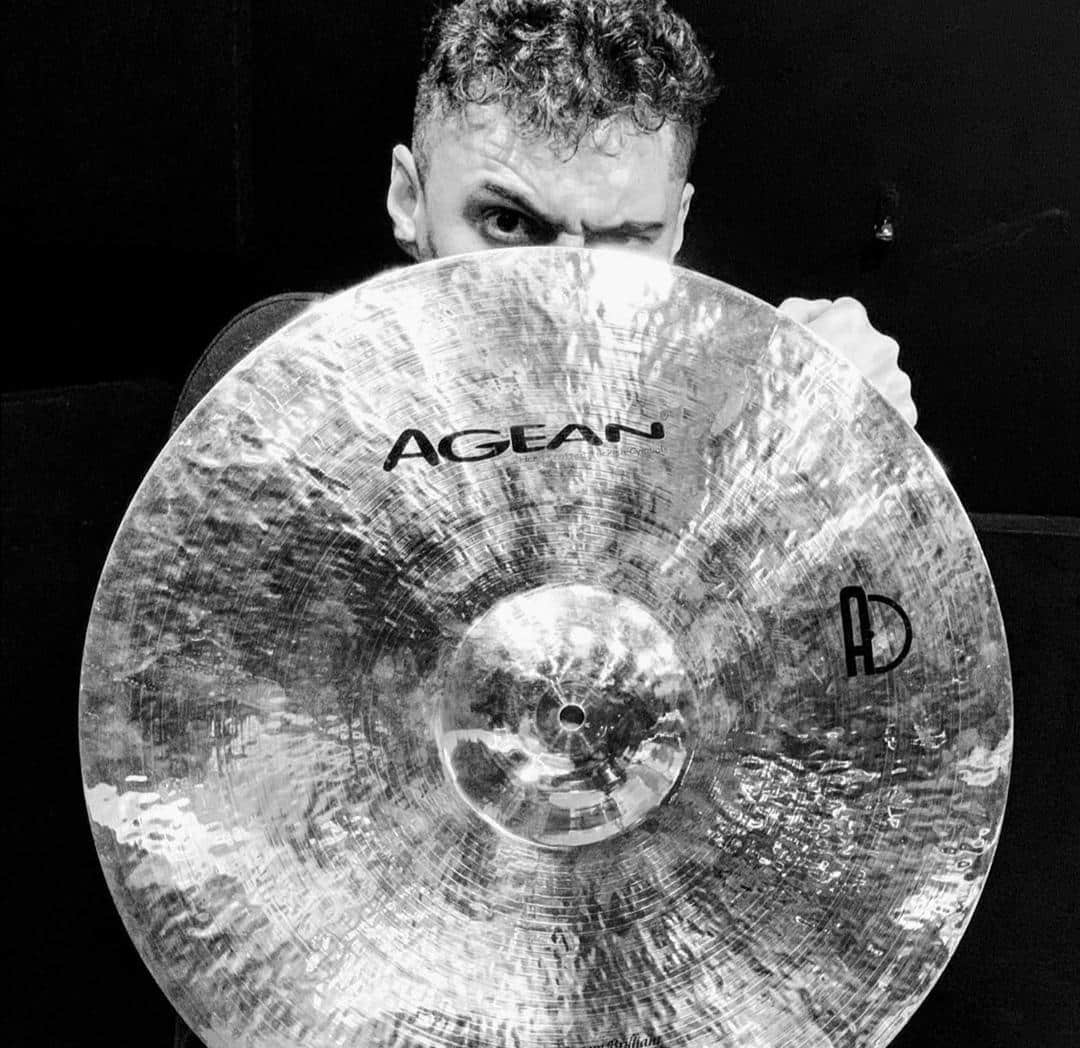 MATHEUS RODRIGUES
Matheus de Melo Rodrigues, better known as Math, through his YouTube channel entitled “Batucando com Math”, started playing drums at the age of 17 in the church he attends, studied with Juvenildo Santos, Silas Henrique, Samuel Mello, Luiz Pagoto and Felipe Sombra. He is currently studying at EM&T (School of Music and Technology) with Professor Diego Gil, in São Paulo. Matheus started his work on YouTube in
December 2015, when she was born in her heart
proposal to give biblical passages and teach
some gospel chops phrases for
encourage other drummers. The results came
fast, with just over 50 videos Matheus added
over 700,000 views on your channel today
has more than 84 thousand subscribers and
6,120,829 views. It also works by
workshop in Brazil and giving drum lessons
(face-to-face and online) between 100 to 300 students per month.

Thank you for your interest in Agean Cymbals.

We are always interested in drummers from all kinds musical styles and backgrounds joining our endorsement program!
When choosing our endorsee’s, we consider where they are at in their career, their level of exposure and playing ability – The discount which is extended is determined by these factors.
We are only offering “Endorsement Discounts” at this time.

Your email should include pictures, biography, media (cd or video) and any articles or reviews published about your band.